After Connor O’Shea won my heart, I just had to meet his brothers! The Road to Magnolia Glen by Pam Hillman is the second book of the Natchez Trace series.

Bitter since his eldest brother abandoned their family in Ireland, Quinn O’Shea travels to Natchez, Mississippi, ready to shuck the weight of his duty and set off on an adventure of his own. It’s time Connor, as head of the family, took responsibility for their younger siblings. While aboard ship, a run-in with three Irish sisters lands Quinn in the role of reluctant savior. Though it may delay his plans, he cannot abandon the Young sisters, especially the tenacious yet kind Kiera.

Upon arriving in the colonies, Kiera Young prepares to meet her intended and begin her new life. But she soon discovers the marriage her brother-in-law arranged was never meant to be, and a far more sinister deal was negotiated for her and her sisters.

Quinn offers to escort his charges safely to Breeze Hill Plantation and his brother’s care, fully intending to seek his freedom elsewhere. But the longer he remains, the greater his feelings toward Kiera grow and the more he comes to realize true freedom might be found in sacrifice.

One of my favorite dirty little secrets of history (aka things I’m pretty sure they didn’t teach us in school which I learned through reading historical fiction) is the Old World practice of sending unwanted folks (convicts, political foes, the poor, etc.) to the Colonies! Imagine a ship full of people, one group seeking opportunity and the rest being sent to the New World against their will! What a delicious plot-twist for our Americanized (often skewed) version of history!

I simply adore the O’Shea brothers! Hot-tempered and hardworking (much like his eldest brother), Quinn has begrudgingly stepped up to fill the role of caretaker/guardian for the two youngest O’Sheas. While he tends to blow a lot of steam over his older brothers’ past choices, Quinn’s loyalty runs deep. This middle born O’Shea brother has a protector’s heart, especially when it comes to damsels in distress!

Kiera Young has been sent to the Colonies with her two younger sisters in tow for the purpose of an arranged marriage. Although the reality of her situation is more distressing than her worst nightmares, Kiera conducts herself with dignity and class as an independent Irish lass should! Fueled by her ingenuity and pluck, Kiera grabs life by the reins and tenaciously holds on for the ride.

Honestly, all of that wonderfulness is just the icing on top, I was captivated from the moment Quinn opened his mouth and that honeyed Irish brogue skipped right out! I enjoyed every aspect of this story from the cultural diversity and period lifestyle to the foundational role of hope, faith, and forgiveness. This book has earned its place among my all-time favorites and I highly recommend it!

CBA Bestselling author Pam Hillman was born and raised on a dairy farm in Mississippi and spent her teenage years perched on the seat of a tractor raking hay. Pam’s life in the country and her love of the old west bring authenticity to her work and depth to her characters, something that has been recognized many times in the industry through writer’s awards.

Her work has placed in dozens of writer’s contests, including being a four-time Romance Writers of America Golden Heart finalist with Claiming Mariah, her second novel, winning the Award for Best Inspirational. Other awards include the Inspirational Readers Choice Award, International Digital Award, and the EPIC eBook Award.

Pam lives in Mississippi with her husband and family. 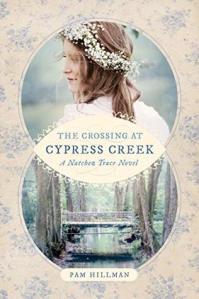 Thanks to the generosity of a reader friend, we have a print copy of The Road to Magnolia Glen for one Faithfully Bookish reader!

Did y’all know the French and Brits were dumping folks in the colonies against their will?!
If so, where did you learn of the practice?
Be sure to add The Road to Magnolia Glen by Pam Hillman to your tbr!

29 thoughts on “The Road to Magnolia Glen by Pam Hillman”