Let’s talk about today’s featured book, Back in the Saddle by Ruth Logan Herne! It is one of my enduring favorites (and one of the first advanced reader copies I ever received). I highly recommend this series! So, let me know if you’ve read the book or added it to your tbr!

It’s been a long time since Colt Stafford shrugged off his cowboy legacy for shiny Manhattan loafers and a promising career on Wall Street. But when stock market manipulations leave him financially strapped, the oldest son of legendary rancher Sam Stafford decides to return to the sprawling Double S ranch in Gray’s Glen, Washington. He’s broke, but not broken, and it’s time to check in with his ailing father, and get his legs back under him by climbing into the saddle again.

He doesn’t expect to come home to a stranger pointing a loaded gun at his chest— a tough yet beautiful woman that Sam hired as the house manager. Colt senses there’s more to Angelina Morales than meets the eye and he’s determined to find out what she’s hiding…and why.

Colt’s return brings new challenges. Younger brother Nick has been Sam’s right-hand man at the ranch for years and isn’t thrilled at having Colt insert himself into Double S affairs. And the ranch’s contentious relationship with the citizens of Gray’s Glen asks all the Stafford men to examine their hearts about what it truly means to be a neighbor.  And as Wall Street recovers, will Colt succumb to the call of the financial district’s wealth and power—or finally the courage to stay in the saddle for good?

I just really love Ruth Logan Herne novels! The first page grabbed my attention and the whole book was one wild ride. Colt Stafford and Angelina Morales each bear secrets and past hurts that cloud their better judgment. Colt is the returning prodigal and hesitant to be reunited with the family he essentially shut out of his life. Coming home seems to soften his heart while familiar places and faces unlock memories long suppressed. Colt grows by leaps and bounds into the man he was always meant to be.

Angelina is used to being in control yet her father’s death has shaken her confidence in her own plans and left her with a very unfamiliar feeling, vulnerability. She’s a strong woman, willing to turn her life upside down and go into hiding to protect her son and her mother. Angelina is a force to be reckoned with and none of the men on the Double S dare cross her, until Colt. She never meant for ranch life to be any more than an escape but there’s no denying the growing attraction and respect she has for him.

Back in the Saddle is a great start to what promises to be a must-read series. Readers get to know the Stafford family in this first installment and I am excited to read more about each one of the different brothers and the various ranch hands too!

I received a complimentary copy of this book from the publisher and was under no obligation to post a review. The opinions expressed are my own.
This review was originally posted on 5/11/16. 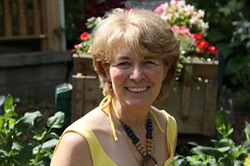 Ruth Logan Herne loves Charlie Brown Christmas trees, rooting for the underdog and people who go the distance while others see the path as too long or broken! She loves God, chocolate, writing, dogs and is blessed by a sprawling family, oodles of grandkids and a sweet old farmhouse in constant need of work. She’s sure that clean rooms are over-rated, snakes and possums should mind their own business and buy their own farm and puppies and kittens and babies are about the cutest things on Earth.

A “pull-up-your-big-girl-panties-and-move-on” kind of gal, she is blessed to be married to her high school sweetheart (although it wasn’t as if THEY WERE KNOCKING DOWN THE DOOR to challenge him for her!!!), work with young families who allow her to exploit their sweet children on blogs, and rock babies on a regular basis. An author for Love Inspired Books and Summerside Press, she lives in upstate New York.

Have y’all read the Double S Ranch series or other titles from Ruth Logan Herne?
Are you adding Back in the Saddle to your tbr right now?

Home on the Range by Ruth Logan Herne

More Than a Promise by Ruth Logan Herne

Peace in the Valley by Ruth Logan Herne