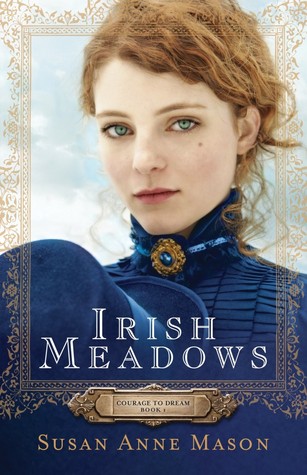 Irish immigrant James O’Leary has spent his life building Irish Meadows into a thriving horse farm and is not about to let hard economic times threaten its success. He intends for his daughters to marry prosperous men–ones who will secure the family’s rightful place in society, and at the same time, guarantee the future of Irish Meadows. Both girls, however, have different visions for their futures.

Brianna and Colleen O’Leary know their father expects them to marry well. Yet despite his wishes, Brianna, the quieter sister, dreams of attending college. Vivacious Colleen, meanwhile, is happy to marry–as long as her father’s choice meets her exacting standards. When stable hand Gilbert Whelan returns from college and distant family member Rylan Montgomery stops in on his way to the seminary in Boston, the two men quickly complicate everyone’s plans. It will take every ounce of courage for both sisters to follow their hearts. And even if they do, will they inevitably find their dreams too distant to reach?

Sisters! I have 3 of them and let me tell y’all, we’re as different as cats and dogs and sometimes the fur did fly! Without a doubt, Bree and Colleen have the fur flying kind of relationship. Their father isn’t helping matters when he decides to choose their future husbands regardless of their feelings.

Younger sister Bree is quiet, studious, and athletic. She has borne the weight of her father’s disapproval for years due to both her active outdoor and intellectual pursuits. Bree wants the opportunity to further her education and marry for love.

Elder sister Colleen has daddy’s approval for her womanly charms but he doesn’t know about her brazen flirtatious scheming. She isn’t as worried about finding love as her little sister but she still wants to pick her own wealthy husband.

Toss in the O’Leary’s unofficially adopted son, Gilbert (you can’t go wrong with a hero named Gilbert, Anne of Green Gables fans agree!), distant cousin Rylan, and dire financial circumstances for a truly combustible situation. For me, the complexities of family relationships and the pressure each member deals with made this a very intriguing and entertaining title.

Also a member of ACFW, Susan lives outside of Toronto, Ontario, with her husband and two children.