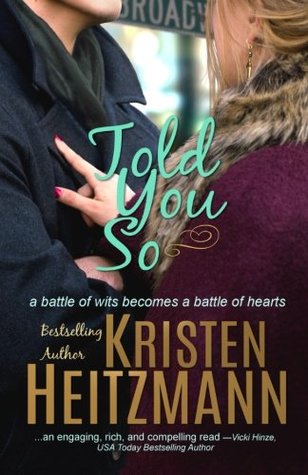 From the minute Grace Evangeline throws her sweet tea in Devin Bressard’s face, their battle of wits and cross-purposes overtakes their lives. Sassy “angelic” Grace Evangeline will stop at nothing to see her romance novel produced for Broadway. Devin Bressard knows all about the commercial success of Ms. Evangeline’s “novels”—as far from his literary, nerve-striking plays as anything could be.

Grace intends to pull his head out of the rarified air long enough to make her point, even if it involves stalking him and infiltrating his friends and colleagues. Devin knows she’s trouble, but who would guess the spokesperson for strength and virtue would be a calamity vortex? He mounts a fierce resistance, but when he’s forced to work with Grace, his profession and sanity aren’t the only things at risk. Collapsing walls on both sides bring a détente that could shatter their bond—or resound through more lives than their own.

Don’t y’all love this cover?! It’s a great fit for the story. Sassy southern lady takes on stodgy New Yorker, I imagine she’s jabbing him in the chest to make her point, he’s calmly (on the outside anyway) looking down his nose at her… entertainment to the max! Their relationship starts with a splash then it’s choppy waters on the high seas.

I love Grace! She lives her faith and she’s committed to inspiring and encouraging people with her super sweet romance novels. Devin is soberly committed to excellence in plays, writing, directing, and producing. He’s a snob but he’s a very talented and very handsome snob. He grows on you, I promise!

When Devin shoots down Grace’s proposed collaboration and her work, she retaliates like a determined southern woman then proceeds to stalk him and introduce herself to his friends. What? That’s not how you resolve conflict? What may seem over the top to you is just normal for Grace Evangeline. Devin gets to learn that fact the hard way as they encounter all kinds of unfortunate (yet entertaining) situations after eventually agreeing to work together.

If you like an authentic story with flawed characters and redemption, I highly recommend this one!

I won this book in a giveaway contest sponsored by the author. The opinions expressed are my own.

Kristen Heitzmann is the bestselling author of contemporary romantic suspense, psychological suspense, and historical novels, including Christy Award finalists Indivisible and The Tender Vine and Christy Award winner Secrets. In 2013, her novel The Breath of Dawn won both a Christy Award and Inspirational Readers Choice Award and was a finalist for a people’s choice award in the Netherlands. She is a fiction track and workshop teacher at American Christian Fiction Writers Conference and keynote speaker for women’s and writers’ conferences.

An artist and mountain hiker, Kristen lives in Colorado with her husband, pets, wildlife, and extended family.

I am so excited to share my thoughts on the next book in this series with you! Told You Twice releases this month and I’ll let you know when it’s available to purchase!

2 thoughts on “Told You So by Kristen Heitzmann”