I’m delighted to introduce y’all to a new-to-me author today! I’ve just read my first of her books and I’m looking forward to checking out her other titles. Plus, she is sharing about Victorian flower language and an exclusive giveaway just for y’all!

After earning her first rejection at the age of thirteen, bestselling author Sandra Byrd has now published fifty books. Her adult fiction debut, Let Them Eat Cake, was a Christy Award finalist, as was her first historical novel, To Die For: A Novel of Anne Boleyn. To Die For was also named by Library Journal as a Best Books Pick, as was The Secret Keeper: A Novel of Kateryn Parr.

A life-long lover of Victorian Gothic romances, Sandra’s new series, Daughters of Hampshire, weaves elements of that mystical, traditional genre with inspirational and literary threads. Mist of Midnight, the series’ first book, was honored with a coveted Editor’s Choice designation from the Historical Novel Society. The second book in the series, Bride of a Distant Isle, launched in March 2016 and the third, A Lady in Disguise is out in 2017.

She is passionate about helping new authors develop their talent and their work toward traditional or independent publication. As such, she has mentored and coached hundreds of new writers and continues to edit and coach dozens to success each year. Please visit www.novelcoaching.com to learn more.

Sandra: The Victorian Era was one in which people considered themselves strictly held to moral standards – especially between the sexes. It was a time when young women were often accompanied by a mother, aunt, or another appropriate chaperone, and private conversation was not always possible.

Expensive gifts were not given until a person was engaged to be married, and affections were not openly expressed early in courtship – at least not where others could see or hear.  Not to be dissuaded, our romantic Victorians found other—perhaps more charming—ways to express their affections.

Beth: Victorians and their rules, oh my!

Sandra: The language of flowers allowed men and women to say things, quietly, that society would not allow them to say aloud. Here are five of my favorites that were favorites then, too:

Roses:  A white one said, “I am worthy of you.” Perhaps this would be sent after a romantic partner was suspected of courting more than one woman.

Tulips: A red tulip, sent, was a bold declaration of love.  There would be no wondering if there were marital intentions after the receipt of a bouquet of such!

Carnations: A red one said, “Alas! For my poor heart!” Take pity on the man. Give him another chance.

Purple Lilacs: The first declaration of love. Imagine the thrill when these heady blossoms arrived to perfume the room and announce the affection you’d hoped to hear!

Oleander: This flower meant … beware.  Oh! Who would send such a warning? It has my gothic mind turning toward the next mystery…

Tell us about your latest release.

Sandra: A Lady in Disguise is the third, and final, book in my Daughters of Hampshire series, a series of Victorian Gothic Romances.  Not familiar with what makes a Gothic Romance? Pop over to this page on my website for a quick introduction! The other two books in the series are Mist of Midnight and Bride of a Distant Isle.  I have just loved writing these books and hope that you, and your readers, will love reading them, too!

In this intriguing novel of romance, mystery, and clever disguise set in Victorian England, a young woman investigates the murder of her own father. 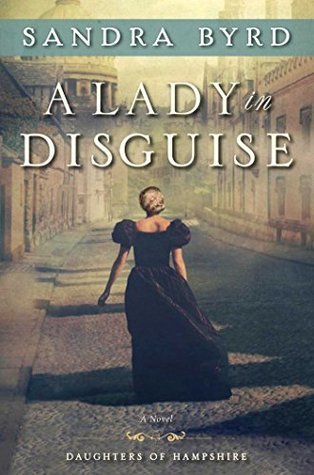 After the mysterious death of her father, Miss Gillian Young takes a new job as the principal costume designer at the renowned Drury Lane Theatre Royal. But while she remembers her father as a kind, well-respected man of the Police Force, clues she uncovers indicate he’d been living a double life: a haunting photograph of a young woman; train stubs for secret trips just before his death; and a receipt for a large sum of money. Are these items evidence of her father’s guilty secrets? His longtime police partner thinks so.

Then Gillian meets the dashing Viscount Thomas Lockwood. Their attraction is instant and inescapable. As their romantic involvement grows, Gillian begins to suspect even Lockwood’s motives. Does Lord Lockwood truly love her? Or is his interest a front for the desire to own her newly inherited property? And what should she make of her friend’s suggestion that Lockwood or men like him were involved in the murder of her father?

Soon Gillian is convinced that her father has left evidence somewhere that can prove his innocence and reveal the guilty party. But someone wants to stop her from discovering it. The closer she comes to uncovering it, the more menacing her opposition grows. With her life on the line, Gillian takes on an ingenious disguise and takes on the role of a lifetime to reveal the true killer—before it’s too late both for her and for those that she loves.

Beth: This is such an engaging story and interesting time period! I’ll have my full review up very soon!

Sandra: Although A Lady in Disguise is the final book in the Daughter of Hampshire series, I am delighted to pass along that it will not be the final Victorian Gothic Romance I’m writing. I’ll be writing three more books, all in the same vein, for Tyndale House!  If you’ll please sign up for my newsletter here, I can let you know when the books are out. And … we hold a very fun teapal teacup exchange in September. You won’t want to miss it!

Beth: Thank you so much for sharing about Victorian flower language and your latest bookish news, Sandra!!!

Sandra Byrd has generously offered to send a copy of A Lady in Disguise, along with one of these delightful Victorian cameo jewelry sets, to one fortunate Faithfully Bookish reader!

What is your favorite flower?