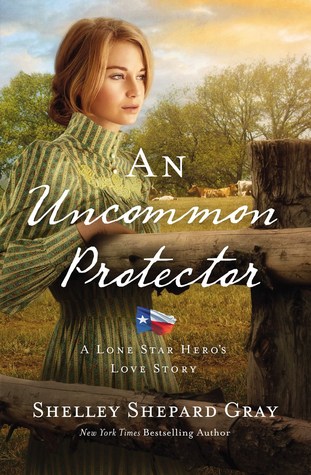 Overwhelmed by the responsibilities of running a ranch on her own, Laurel Tracey decides to hire a convict—a man who’s just scary enough to take care of squatters and just desperate enough to agree to a one year post.

The years following the war have been hard on Laurel Tracey. Both her brother and her father died in battle, and her mother passed away shortly after receiving word of their demise. Laurel has been trying to run her two hundred acre ranch as best she can.

When she discovers that squatters have settled in her north pasture and have no intention of leaving, Laurel decides to use the last of her money to free a prisoner from the local jail. If she agrees to offer him room and board for one year, he will have to work for her to pay off his debt.

Former soldier Thomas Baker knows he’s in trouble when he finds himself jailed because he couldn’t pay a few fines. Laurel’s offer might be his only ticket out. Though she’s everything he ever dreamed of in a woman—sweet and tender-hearted, yet strong—he’s determined to remain detached, work hard on her behalf, and count the days until he’s free again.

Y’all, this series has something very special… man love. That’s right, I mean good old-fashioned, band of brothers, solemn vow loyalty! Toss in a Texas damsel in distress, a dash of mystery, a splash of danger, and a healthy dose of romance and that, my friends, is a recipe for one delicious read!

Laurel Tracey is just another rancher’s daughter-next-door until readers consider her resilience, determination, and tenacious work ethic. The sheer number of losses Laurel has suffered is a staggering tragedy. Y’all, my heartstrings! Add critical, freeloading, silver spoon half-siblings to Laurel’s crushing workload and lingering grief and it’s pretty clear that she needs help if she’s going to keep the ranch.

Thomas Baker is no stranger to hardship and that just seems like a huge understatement. His troubled past has left even more scars on his spirit than the ones he bears on his flesh. Thomas is no gentleman but he is willing and able to work hard and treat a lady with respect. His fierce drive to protect Laurel extends beyond repaying a debt, Thomas is determined to defend her honor, her livelihood, and her home.

Readers become acquainted with the heroes of this series through flashbacks to their time in the POW camp and each reunion after the war’s end is both challenging and heartwarming. I can’t wait to see which officer will find love next!

I requested the opportunity to read and review this title through BookLook Bloggers and NetGalley. The opinions expressed are my own.

Before writing romances, Shelley lived in Texas and Colorado, where she taught school and earned both her bachelor’s and master’s degrees in education. She now lives in southern Ohio and writes full time. Shelley is married, the mother of two children in college, and is an active member of her church. She serves on committees, volunteers in the church office, and currently leads a Bible study group, and she looks forward to the opportunity to continue to write novels that showcase her Christian ideals.

When she’s not writing, Shelley often attends conferences and reader retreats in order to give workshops and publicize her work. She’s attended RWA’s national conference six times, the ACFW conference and Romantic Times Magazine’s annual conference as well as traveled to New Jersey, Birmingham, and Tennessee to attend local conferences.

Shelley is a member of RWA’s Published Author chapter, ACFW, and the Faith Hope and Love Chapter of RWA.

The Heart of a Hero series

5 thoughts on “An Uncommon Protector by Shelley Shepard Gray”