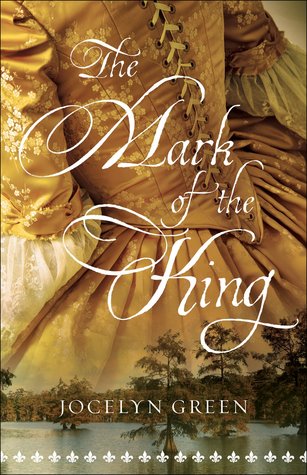 After being imprisoned and branded for the death of her client, twenty-five-year-old midwife Julianne Chevalier trades her life sentence for exile to the fledgling 1720s French colony of Louisiana, where she hopes to be reunited with her brother, serving there as a soldier. To make the journey, though, women must be married, and Julianne is forced to wed a fellow convict.

When they arrive in New Orleans, there is no news of Benjamin, Julianne’s brother, and searching for answers proves dangerous. What is behind the mystery, and does military officer Marc-Paul Girard know more than he is letting on?

With her dreams of a new life shattered, Julianne must find her way in this dangerous, rugged land, despite never being able to escape the king’s mark on her shoulder that brands her a criminal beyond redemption.

Readers, prepare to be completely captivated by this story… WOW!!! The rich cultures and customs from France to the dismal conditions across the sea in Louisiana are fascinating. However, it was the challenging experiences of the characters within this book are what kept me turning page after page long into the night and early morning!

Although Julianne Chevalier is continually faced with dire circumstances, she relentlessly strives to heal and rise above them. She is an intelligent, tenacious, hard-working, and virtuous young woman of integrity. Julianne’s journey as a midwife, convicted criminal, and early settler of Louisiana kept me absolutely rivetted from beginning to end.

Simon LeGrange is a passionate and defiant man who is more than a little rough around the edges yet full of compassion and chivalry. His quick temper and brute strength get him into trouble on multiple occasions yet I still found myself cheering him on and willing him to become the man he was meant to be.

Marc-Paul Girard is an exemplary military officer forced to navigate the bleak and tenuous state of affairs in the early French settlements of Louisiana. With conditions so miserable, it’s increasingly difficult to discern friend from foe. Marc-Paul works to fulfill his duties and examine the true nature of God’s grace.

The history behind this story is simply incredible yet Jocelyn Green’s artistic storytelling shines through as the truly captivating feature. I highly recommend this novel and now I am determined to read her previous books as well!

I requested the opportunity to read and review this title through NetGalley, the author, and the publisher. The opinions expressed are my own.

Jocelyn Green is the award-winning author of a dozen books, including fiction and nonfiction. A former military wife herself, she offers encouragement and hope to military wives worldwide through her Faith Deployed books and The 5 Love Languages Military Edition, which she co-authored with best-selling author Dr. Gary Chapman.

Her Heroines Behind the Lines Civil War novels, inspired by real heroines on America’s home front, are marked by their historical integrity and gritty inspiration. Jocelyn graduated from Taylor University in Upland, Indiana, with a B.A. in English, concentration in writing.

What drew you to tell the story of The Mark of the King?

First of all, the history was both fascinating and new to me. There are many excellent books set in the British colonies, but the French colony of Louisiana seems to be much lesser known. The years of forced immigration, whereby Paris cleaned out its prisons to populate a floundering wilderness, was just too rife with story potential to ignore. It’s a story of incredible hardship and courage, fear and hope, judgment and redemption. It also offered an opportunity to unlock a slice of American history most of us know little about, which appeals to me a great deal.

What is the “mark of the king”?

The mark of the king, as referenced in the title, has two meanings. The first is very literal. It’s the fleur-de-lys symbol of the French monarchy that was branded on certain criminals during the time the novel takes place, to permanently mark them with judgment. In the novel, this mark plays a big role.

But there is a spiritual layer to the phrase, as well. As believers, we serve a higher King than any authority here on earth. Our lives are marked by His grace, no matter how scarred we may have been by judgment from others—whether that judgment was deserved or not. God’s grace covers all of it. Grace covers all of us.

What was your favorite part of the process when it came to writing this novel?

Research breakthroughs literally make me shout for joy. For instance, my French sister-in-law translated a document I found in New Orleans for me, giving me a critical piece of the puzzle. Another challenge I ran into was just understanding the topography of the region. Visiting New Orleans still left me with questions as to what my characters would have encountered, geographically, in the year 1720.

When I found an article online that hinted at the information I was looking for, I emailed the author, a professor at Loyola University. I jumped up and down when he wrote me back, with a goldmine of details!

We ended up exchanging about six emails, question and answer style. With his help, I finally got a handle on the lay of the land between New Orleans and Lake Pontchartrain in the 1720s, with all its sand ridges, bayous, swamps, marches, including types of trees and vegetation that grew in each region. Being able to paint the scenes with accurate details is really important to me, so this was definitely a research highlight!

Did anything surprise you during your research?

Oh, plenty. The biggie, and one that readers will see depicted in the novel, was a mass wedding ceremony in Paris, in September 1719, between 184 female convicts and the same number of male convicts who had only just met.

I was also shocked to discover that of the seven thousand Europeans who entered the Lower Mississippi Valley between 1717 and 1721, at least half of them either perished or abandoned the colony before 1726. Other surprising things I learned:

In Louisiana, European settlers learned from the natives to use bear grease as mosquito repellant.

Since I have a pug in the story, I researched the breed to make sure they were around in the early 1700s. Along the way, I learned some fun and fascinating things that didn’t fit into the novel at all, but surprised and delighted me, as a former pug owner myself.

For example, before her marriage to Napoleon Bonaparte, Joséphine had her pug Fortune carry concealed messages to her family while she was confined at Les Carmes prison, it having alone been given visiting rights. In nineteenth century England, Queen Victoria bred pugs named Olga, Pedro, Minka, Fatima and Venus, and she helped establish the National Kennel Club.

Here’s my favorite though: in seventeenth-century Italy, pugs rode up front on private carriages, dressed in jackets and pantaloons that matched those of the coachman. Ha!

Which character do you most closely identify with in The Mark of the King, and why?

The world Julianne Chevalier inhabits—Paris, then New Orleans in the 1720s—is vastly different from the world I live in. But of all the characters in the novel, I relate to her the most. I share her strong desire to find purpose and use one’s skills and gifts wherever life leads. I also identify with her devotion to her brother and the pain of separation from him, since I greatly missed my own brother when he was a missionary—in France, in fact, where he met his beautiful wife, who grew up outside of Paris!

On an even more personal level, my former tendency to withdraw from community when experiencing pain is represented in Julianne’s character, as well. I once learned the hard way that isolation breeds depression. So even though Julianne and I share very few circumstances in common, these deeper parallels are quite timeless.

Why do you write historical fiction?

History still matters today. We can learn so much from the people who lived before us, and how they shaped and were shaped by the events of their generations. Not only can we find inspiration from them, but also a much better perspective as we look at the world today. Unfortunately, so often, history is distilled into a list of dates and names—not interesting at all. The vehicle of historical fiction allows us to explore segments of the past through the lens of the people who lived it. We get to explore the full spectrum of the human condition through the novel.

Personally, I love learning while being entertained with drama, and studies show that when we’re curious about something—such as what will happen to our heroine in the next chapter—we’re far more likely to remember surrounding details, such as the historical context. To me, that’s the icing on the cake. When readers care about characters and learn about history at the same time, I’m thrilled.

Hop over to Jocelyn Green’s website to enter her giveaway, read an excerpt, and hear the correct French pronunciations of many names and places from the book!