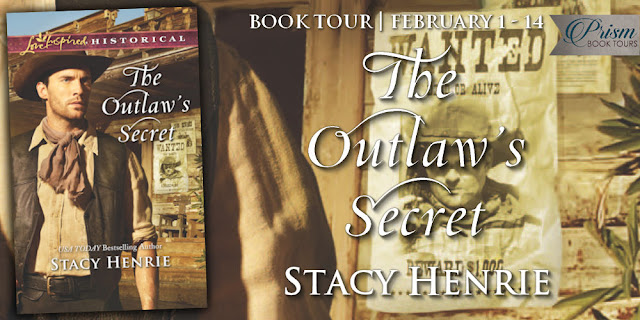 On Tour with Prism Book Tours.

The Outlaw’s Secret by Stacy Henrie

We hope you enjoyed the tour! If you missed any of the stops, go back and check them out…

Launch – Note from the Author

I’m so excited to introduce readers to the Becketts brothers—one a lawman, the other an outlaw—in my next two books releasing from Love Inspired Historical. In THE OUTLAW’S SECRET, you’ll meet Tate Beckett, a Pinkerton detective posing as his outlaw twin brother Tex. You’ll also meet Essie Vanderfair, a dime novelist in need of a great story. And she hopes to find it when she begs to go along with the gang of train robbers that Tate has infiltrated. These opposites-attract characters were so much fun to write as were the outlaws Essie meets and interviews.

“There were several instances that brought a smile to my face and I wanted how to know they were going to get out of the mess they were in. This is a fun book that is set in the “Old West”. There are outlaws, lawmen, and a feisty heroine.” 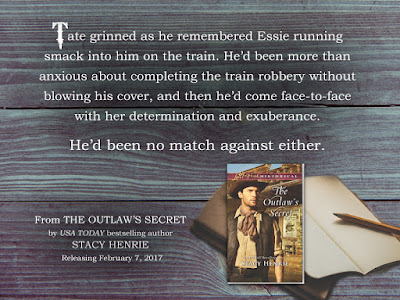 “This was a fun book. The characters were likable and flawed just enough.”

Q: What other genre, one day, would you like to write? Why or why not?

A: Though I’ve tried my hand at writing contemporary, I enjoy writing historicals much more. I’ve also dabbled with the idea of writing historical women’s fiction, but I love a good love story so I don’t know that I could pull off writing something without having a romance at its heart.

“I love a romance that makes me swoon and this one does just that. Not only are the romance and characters well done, the setting is fantastic too. I felt myself transported back to the late 1800s and loved being a part of that time–when I wasn’t shivering in my boots with fear. I also really enjoyed Essie’s writing moments, which are often thoughts–she’s an interesting character with a vivid imagination and has me engrossed in her ideas. I’m definitely looking forward to what this author writes next!”

Born and raised in Idaho, Tate Beckett is an identical twin. But his brown hair and blue eyes are about the only thing he shares with his brother Tex. Tate’s brother is the infamous outlaw known as the Texas Titan and Tate feels duty-bound to atone for his brother’s crimes by tracking down other outlaws in his job as a Pinkerton detective agent…

Reading Is My SuperPower – Review

“The Outlaw’s Secret has it all – action, adventure, romance, humor, faith and depth. It will make you smile and it will twist your heart too. It will make you hold your breath – for the kisses and again for the nail-biting action. Essie is such a fun heroine, and Tate is most definitely swoonworthy. Another fun and sweet novel by Stacy Henrie that I highly recommend!”

I Am A Reader – Undisguised: the Pinkerton National Detective Agency 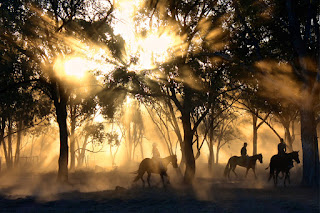 While operatives were required to abide by a code of ethics—including things like not accepting reward money and working with local law enforcement—Allen Pinkerton was a staunch believer in the end justifying the means. That meant that sometimes in order for an operative to track down a criminal, the detective might have to “become” a criminal in a sense—just as Tate does by posing as his outlaw twin brother in order do to bring down the Fletcher gang.

The Power of Words – Review

“There’s nothing typical about Stacy Henrie’s newest release and she has become one of my favorite writers in the Love Inspired line. The Outlaw’s Secret has it all – character depth, humor, romance, suspense, and rich historical detail. It’s well written, entertaining, and refreshingly unusual in storyline.”

“On the romance side, it’s fun to watch Tate/Tex and Essie dance around each other, both mistrusting in turn and each fiercely determined to follow their own goals. Their journey includes moments of danger, threats to budding feelings, and a few twists.”

Q: As an author, I often get asked how much of myself I put into my characters. So I’m curious, if you were on that train instead of Essie, how would you handle the situation?

A: I would’ve been terrified! And unlike Essie, I would have chosen to stay seated and silent and hopefully unseen.

Getting Your Read On – Review

“This was such a fun adventure. The story started off with a bang and took off from there. I settled right in and enjoyed the ride!”

Tate Beckett’s jaw was clenched so tight he thought it might snap. Of all the rotten misfortune. He had to run into a nosy, busybody like Miss Essie Vanderfair on his first job with Fletcher’s gang. If he wasn’t careful, this woman, with all her probing questions, would figure out he wasn’t the Texas Titan after all. Then his covert work, posing as his outlaw twin brother, would be finished. 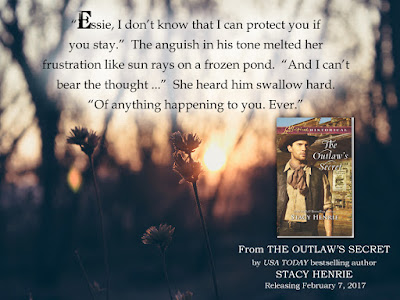 “Once I started reading this book, I settled in and didn’t want to put it down. It moves at a fast pace and there was never a dull moment. I enjoyed it from beginning to end and highly recommend it to anyone who enjoys a good, clean western romance!”

Fletcher’s mouth curled up in a sneer. “Try me, Tex.” He lifted his hands in a mock gesture of innocence. “But now your life is tied with hers.” He walked away, adding over his shoulder, “I think you’re smart enough to figure out what that means.”

“Stacie Henry has masterfully written a story that readers will be enthralled with from page one until the very end. This is a fairly quick and easy read that will inspire the romance in all of us! Henry has a distinct way of writing that will draw readers in as they leave the world of reality behind and enter the enjoyable and entertaining world of the Wild West.”

Sure enough she spotted the impression of horse hooves in the dirt and a partially trampled sagebrush farther on. If she kept heading in that same direction, she would eventually stumble into the trio.

She bent forward over the horse and coaxed it to go faster. There were interviews to conduct. And no one, not even a handsome, sly, back-stabbing Texan, was going to stop her. 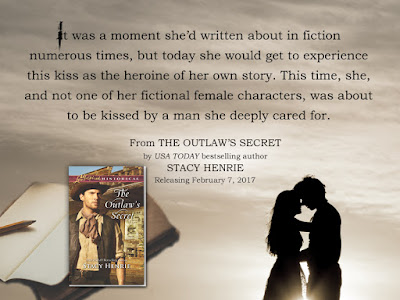 Q: Is there anything you would like to say to your fans or readers?

A: Thanks for your support! I’m excited to share Tate and Essie’s story with you. If you read it and enjoy it, then look for Tex’s story in July, when you’ll find out where the Texas Titan was while Tate was impersonating him to take down Fletcher’s gang.

“The Outlaw’s Secret delivers humor, romance, faith, and some wonderfully exciting moments where death is only a step away from both hero and heroine. . . . Fans of Stacy Henrie and of western historicals will surely not be disappointed in the thrilling pages. . .”

“I was glued to the pages to find out when Essie would discover Tate’s secret, when they would give in to the chemistry building between them, and if the real Tex would make an appearance. Another great western from Stacy Henrie with suspense, action, and romance!”

Her heart beat faster as she opened her mouth and said, “Call me Essie. It’s only fair.”

A low chuckle sounded in her ears. “Try to get some sleep, Essie. We’ve got another long ride tomorrow.”

Smiling in triumph, she closed her eyes, but it was still some time later before she could turn her thoughts from the silent figure guarding the camp. And from the memory of her name on those nice, masculine lips.

Don’t forget to enter the giveaway below, if you haven’t already…

The Outlaw’s Secret by Stacy Henrie 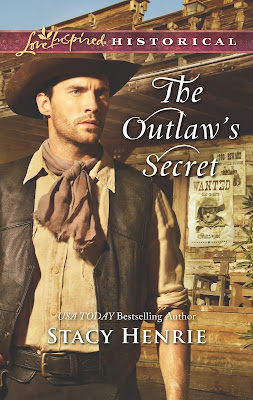 Getting taken hostage by a gang of train robbers wasn’t in dime novelist Essie Vanderfair’s plans, but interviewing these men could make her career soar. Especially since the gang includes legendary outlaw Tex Beckett, better known as the Texas Titan. Tex is famed for his protection of women and children, so she’ll be fine…right?

Keeping the gang in line was hard enough before a stubborn, beautiful writer interfered. Now Tex is scrambling to keep Essie safe, to gather evidence against the gang and most of all to hide his dangerous secrets. First, that he’s a detective working undercover. And second, that he’s not the Texas Titan at all, but Tex’s twin brother, Tate Beckett. 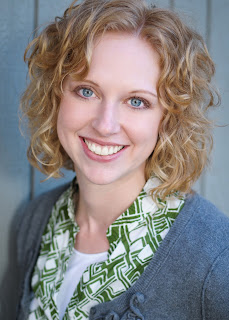 USA Today bestselling author Stacy Henrie is the author of western romances and the Of Love and War series, which includes Hope at Dawn, a 2015 RITA Award finalist for excellence in romance. She was born and raised in the West, where she currently resides with her family.

She enjoys reading, road trips, interior decorating, chocolate, and most of all, laughing with her husband and kids. You can learn more about Stacy and her books by visiting her website at stacyhenrie.com.