Hey, reader friends! We’re celebrating Buying Love by Toni Shiloh as part of a Singing Librarian Books Tours Blog Hop! I hope you enjoy getting to know the author, reading a snippet of the book, and don’t forget to enter the giveaway!

Toni Shiloh is a wife, mom, and Christian fiction writer. Once she understood the powerful saving grace thanks to the love of Christ, she was moved to honor her Savior.

She writes to bring Him glory and to learn more about His goodness. She spends her days hanging out with her husband and their two boys.

She is a member of the American Christian Fiction Writers (ACFW) and president of the Virginia Chapter.

What inspired the idea for Buying Love?
I love marriages of convenience stories. Unfortunately, they seem to belong to the historical genre. I wanted to find a way to incorporate them in the contemporary setting, so I brainstormed and Nina popped in my brain. She’d been orphaned and desperately wanted a family of her own, enough to pay for it. Thus Buying Love was born.

What do you want readers to take away from reading Buying Love?
That no matter what family you were born into, God has a bigger one for you. He can fulfill every role and gap we’re missing and will send people to do the same.

What was the hardest part about writing this novel? What was the easiest part?
When I decided to write Buying Love, I joined NaNoWriMo (National November Writing Month) for the first time ever. In order to win NaNoWriMo you have to write 50,000 words or more during the month of November. It was the first time I ever committed to writing that much at once so seeing my goal on a daily basis was a little daunting. When I figure out the easiest part, I’ll let you know. 😉

What do you like to snack on while you write?
Anything crunchy. Chocolate covered nuts are great, but sometimes I get in the mood for seaweed or chips. It also helps if the snack isn’t messy so I don’t ruin my laptop.

If you could share lunch with any literary character, who would it be and why?
Oh, man, that’s so tough! There are so many characters I have connected with over the years. There’s dear Anne, Elizabeth Bennett, Kate Donovan, and more. Whomever I chose, it would be because I think they’d make an excellent friend.

Will money ruin everything?

Nina Warrenton is ready for the next step in her life pan: marriage–but no one has proposed. Taking matters into her hand, she places an ad in the newspaper hoping to entice a willing stranger. But when she begins to fall for the small-town chef, she realizes how much she wants him to love her and not her money.

Dwight Williams needs fast cash to save the family restaurant. When he sees the monetary offer for
husband, he goes for it. He’s determined to save the legacy his dad left him, but can he let it go to prove his love for her?

Can Nina and Dwight find true love, once money has entered the equation?

Nina Warrenton checked her watch for the umpteenth time. He was late. On the one hand, she was thankful; on the other, she was annoyed. Who makes an appointment and shows up late? Granted living in the D.C. Metro area guaranteed multiple opportunities to be late, but she made an effort to arrive on time to any appointment. Too bad the unknown Mr. Williams didn’t hold the same virtue.

She sighed. Had she acted prematurely? Putting an ad for a husband was a little archaic, but she believed it would get the job done. However, none of the previous candidates had panned out. One man had been released from prison a couple of months ago. Another had answered her ad with the hope of moving out of his mother’s place. Still, another had answered her ad because the voices in his head had prompted him to. She shook her head.

Maybe the fact that Mr. Williams was missing was God showing her he wasn’t the one. Maybe he was prematurely balding or had the personality of wilted lettuce. Of course, she had prayed that God would send her the right man, but there was no guarantee He would acquiesce to her request.

She tapped her pen on the table and looked around the room. The coffee shop was filled with D.C. metropolitans ready to embrace the autumn air. It was a gorgeous day with a light breeze and the preferred seventies temperature. Was it possible that Mr. Williams was already here and hiding behind a coffee mug or laptop, to secretly get a first impression without her noticing? She peeked around the shop, but she was the only one alone.

She glanced at her watch again. He was only five minutes late. Maybe he took the metro and it was running behind. On the other hand, maybe he drove and couldn’t find a parking spot. The sound of her pen hitting the table seemed to mark the seconds. She knew this part of D.C. wasn’t filled with ample parking, but she wasn’t ready to excuse him yet. Her place was a block away and she had made the journey in no time.

She glanced down at her aqua journal to review her notes about the man in question. He had filled out the questionnaire she had sent when he contacted her about the ad. She knew he was a few years older than herself and lived in Loudoun County, a suburb in Northern Virginia. Coming from that direction, he probably was stuck in traffic.

She really wasn’t that obsessed with time. However, he was the third candidate she planned on meeting face-to-face. Third time was the charm, right? If so, why wasn’t he here? Why hadn’t Prince Charming swept her off her feet? Shouldn’t she be the one making him wait?

She glanced up at the tinkle of the door chime. She inhaled sharply. In strode a man, wearing a sweater that matched the color of her notebook, a white-collared shirt peeking above his collar and hanging past the sweater’s edge. His maple-brown sugar skin reminded her of her favorite body scrub. He was gorgeous.

She shifted in her seat wondering if he was her missing appointment. Mr. Williams had agreed to bring a white rose so that she could identify him. However, the bookshelf by the door hid his hands. The man scanned the crowd then brought his hands up and took a sniff of the aforementioned flower. 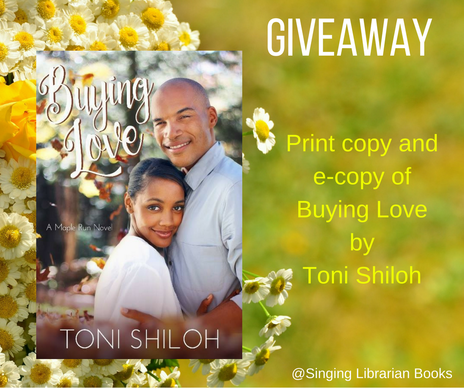 Be sure to add Buying Love by Toni Shiloh to your tbr!

The Trouble with Love by Toni Shiloh + q&a

The Truth Between Us by Tammy L. Gray: spotlight + excerpt

GIVEAWAY! Who can resist chocolate and a privateer hero?? Not me!!
Can't get enough cowboys?! No, actually, I cannot! 👢
Anceint Irish hymn with a traditional Irish melody?! Yes, please!!
GIVEAWAY! Do you have a cowboy to rely on? My cowboy doesn't wear a hat but he does have the boots and hardworking spirit 🥰
GIVEAWAY! Who needs an escape? 🙋‍♀️ Yes, please! Since I'm not likely to jet away to some island any time soon, this looks like a pleasant and affordable alternative!
GIVEAWAY! Do you have siblings? As the eldest in a family of four sisters, I'm particularly attached to the Thatcher sisters and can't wait to get caught up with all their happenings!
After attending Christy Wright's conference in the fall, I knew I had to get my hands on this book to glean some practical business knowledge. Merry Christmas to me!
GIVEAWAY! What is your favorite romance trope? There's no way I could choose just one but the marriage of convenience is definitely near the top of my list!
GIVEAWAY! Any idea where I can get a finder for all our forgotten things? I sure could use one!
GIVEAWAY! The singing and swinging scene from The Greatest Showman always come to mind when I think of trapeze acts of this era. Are you a fan?