If you love hymns and history and romance, like me, I have no doubt that you will adore Newton and Polly by Jody Hedlund!

Newton and Polly by Jody Hedlund 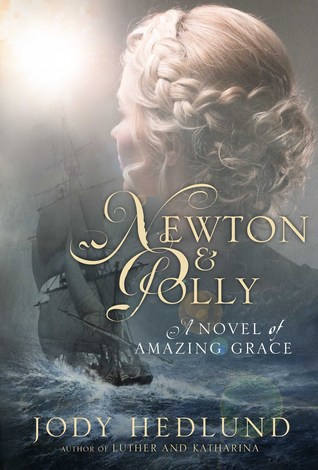 Now remembered as the author of the world’s most famous hymn, in the mid-eighteenth century as England and France stand on the brink of war, John Newton is a young sailor wandering aimlessly through life. His only duty is to report to his ship and avoid disgracing his father until the night he hears Polly Catlett s enchanting voice, caroling. He’s immediately smitten and determined to win her affection.

An intense connection quickly forms between the two, but John’s reckless spirit and disregard for the Christian life are concerns for the responsible, devout Polly. When an ill-fated stop at a tavern leaves John imprisoned and bound, Polly must choose to either stand by his side or walk out of his life forever. Will she forfeit her future for the man she loves?

Step back through the pages of history, to uncover the true love story behind a song that continues to stir the hearts and ignite the faith of millions around the globe.

Wow, y’all! Just… WOW! I love this book! Powerful history and masterful storytelling going on here! Jody Hedlund is one of my all-time favorite authors and she absolutely ROCKS historical fiction!

Young John Newton is impulsive, immature, and often frustrated with his father. Many of us can identify with the strained paternal relationship and even sympathize with that rebellious teenage phase. Polly Catlett is a beautiful, talented, and devout young lady and John is instantly twitter patted. Ah, young love! While Polly enjoys the easy comradery that she shares with John, she is concerned by his rowdy lifestyle and lack of faith.

Spending time with the loving Catlett family is a soothing balm for John’s hurting and lonely heart. He always has a hard time pulling himself away from the warm glow of their home and especially the company of their eldest daughter. John’s poor choices eventually land him in the wrong place at the wrong time, but it’s his bitterness, anger, and bad behavior that really send his life spiraling out of control.

The harsh realities of everyday life in centuries past are often hard for us to imagine but Hedlund doesn’t shy away from the gritty details of stench and filth, the slave trade, and even life in the Navy. For me, knowing more about the story of Newton’s life makes the beloved hymn he penned all the more poignant and powerful. I can’t wait to see which hero of the faith Jody Hedlund will bring to life next!

I requested the opportunity to read and review this book through Blogging for Books. The opinions expressed are my own.

Be sure to add Newton and Polly by Jody Hedlund to your tbr!

7 thoughts on “Newton and Polly by Jody Hedlund”