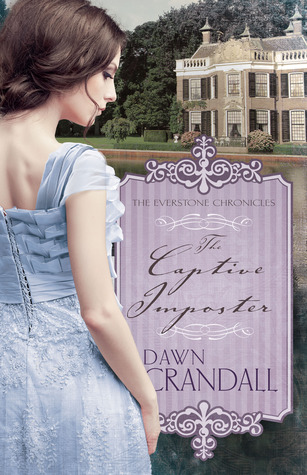 Sent away for protection, hotel heiress Estella Everstone finds herself living undercover as a lady’s companion named Elle Stoneburner at one of her father’s opulent hotels in the mountains of Maine—the one she’d always loved best and always hoped to own one day, Everston. The one thing she doesn’t like about the situation is that her ex-fiancé is in the area and is set on marrying someone else.

Reeling from her feelings of being unwanted and unworthy, Estella reluctantly forms a friendship with the gruff manager of Everston, Dexter Blakeley, who seems to have something against wealthy young socialites with too much money, although they are just the kind of people Everston caters to.

When Estella finds herself in need of help, Dexter comes to the rescue with an offer she can’t refuse. She sees no other choice aside from going back home to her family and accepts the position as companion to his sister. Throughout her interactions with Dexter, she can’t deny the pull that’s evidenced between them every time he comes near.

Estella realizes that while she’s been hiding behind a false name and identity, she’s never been freer to be herself than when she’s with Dexter Blakeley. But will he still love her when he finds out she’s Estella Everstone? She’s not entirely sure.

Following the dramatic events in The Bound Heart, wallflower of the Everstone family, Estella, is sent into hiding. She embraces her little adventure as a companion named Ella and uses the unique circumstances to rediscover her authentic self. It’s so easy to lose sight of who you are when you conform to the expectations of social class and family name. As a bit of a wallflower myself, I can relate to Estella’s people pleasing tendencies.

Dexter is a driven, hardworking, and complex man. He seems to have many layers beneath his gruff, no-nonsense exterior. I appreciate his deep faith, fierce protection of his mother and sister, and his dedication to his work. Dexter has great compassion for the less fortunate but there’s a burr in his saddle when it comes to wealthy socialites. Getting to know Dexter was a lot like unwrapping a present and learning what makes it tick as you put all the pieces together.

I completely enjoyed my visit to Everstone and the glimpse into the workings of a fancy mountain resort. The views were breath-taking and the staff was very accommodating! I’m so excited to read Dawn’s next installment, The Cautious Maiden which just released today!

I received an ebook copy of this title from the publisher. The opinions expressed are my own.

Dawn Crandall is an ACFW Carol Award-nominated author of the award winning series The Everstone Chronicles, which currently consists of: The Hesitant Heiress, The Bound Heart, and The Captive Imposter. The Cautious Maiden is her fourth book and releases October 4th, 2016.

Apart from writing, Dawn is also a mom of two little ones and serves with her husband in a premarital mentorship program at their local church in Fort Wayne, Indiana. A graduate of Taylor University with a degree in Christian Education and a former bookseller at Barnes & Noble, Dawn Crandall didn’t begin writing until 2010 when her husband found out about her long-buried dream. It didn’t take her long to realize that writing books

A graduate of Taylor University with a degree in Christian Education and a former bookseller at Barnes & Noble, Dawn Crandall didn’t begin writing until 2010 when her husband found out about her long-buried dream. It didn’t take her long to realize that writing books was what she was made to do.

Dawn is a member of the American Christian Fiction Writers, the secretary for the Indiana ACFW Chapter (Hoosier Ink), and an associate member of the Great Lakes ACFW Chapter. She is represented by Joyce Hart of Hartline Literary Agency.

6 thoughts on “The Captive Imposter by Dawn Crandall”