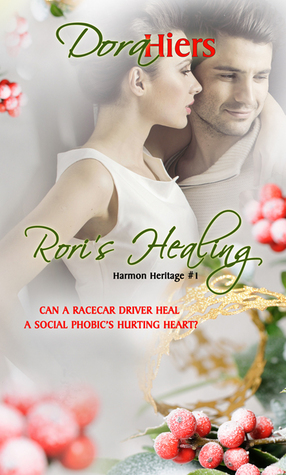 Still stinging from the publicity surrounding her father’s death, social phobic Rori Harmon prefers the solitude of her animal sanctuary, accepting that marriage isn’t in her future.

Racecar Driver Graham Decker refuses to be wrangled into a relationship by another money-hungry female. On a philanthropy mission, he arrives just in time to assist Rori with a llama birthing, but his appearance thrusts her into the media spotlight again.

Has Graham found a woman who doesn’t care how deep his wallet extends? Has Rori finally met a man who will stick around when times get tough? Is healing for a hurting heart finally within Rori’s reach?

Dora is a new to me author! I was attracted to the cover and intrigued by the story blurb. So, Rori Harmon hides away from the outside world after the media’s reaction following her father’s death. Boy, I can understand why! I tend to scuttle into my own shell when the ride gets rough, too! Rori has centered her life around her animal sanctuary, avoiding everyone except her best friend, brothers, mother, and step-father. This gal’s support system is ironclad. Rori’s family and best friend help her, encourage her, and let her heal in her own time and in her own way, surrounded by her rescue animals.

Graham Decker is a successful racecar driver and philanthropist but unlucky in love. We all know money can’t buy everything. His ex-wife married him for his fame and fortunes then left him for a rival driver. Rori and Graham’s paths cross in a humorous misunderstanding and the story just keeps getting better and better. Graham starts volunteering at the sanctuary in order to spend more time with Rori. He’s a pretty great guy.

Both main characters were well developed and their inner dialogs and interactions with one another were relatable and endearing. All the animals throughout the story added a measure of comfort and humor. Plus, I had no idea llama’s hissed so I learned something new! I love how protective and thoughtful Graham is and my favorite Rori characteristic is her honesty. Overall the story was sweet, funny, and encouraging. I am excited to read the next two books in the Harmon Heritage series and more by Dora Hiers!

I requested this book through NetGalley in order to read and offer an honest review. The opinions expressed are my own.

After a successful auditing career, Dora left the corporate world to be a stay-at-home mom to her two sons. When her youngest son no longer wanted her hanging out at school with him anymore, Dora started writing Heart Racing, God-Gracing romance. She is a member of Romance Writers of America (RWA) and her local chapter, Carolina Romance Writers.

Dora and her real life hero make their home in North Carolina. When she finally takes a break from cranking out stories, she enjoys reading, family gatherings, and mountain cabin getaways. She despises traffic, bad coffee, technological meltdowns, and a sad ending to a book. Her books always end with a happily-ever-after!

Are you a NASCAR fan? The race was on at our house every Sunday while I was growing up in my parents home. I don’t follow the sport anymore but my husband and son like to watch a race occasionally.
//
//z-na.amazon-adsystem.com/widgets/onejs?MarketPlace=US